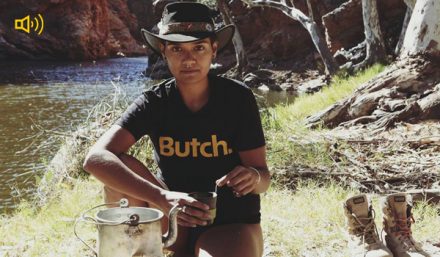 As part of Create NSW at Vivid Ideas, we caught up with panellist Bee Cruse who will join a conversation with a new wave of Aboriginal creatives across arts, screen and culture.

We are thrilled to have you on the Listen Here Now Vivid Ideas panel as part of Create NSW at Vivid Ideas coming up in June at the Museum of Contemporary Art. You’re working across a range of projects and practices including film, television, theatre and contemporary performance. How would you best describe yourself and your work?

I am a highly spiritual and cultural being. I am Aboriginal; coming from the Gomeroi, Wiradjuri and Yuin-Monaro people of NSW, Native American; coming from the Hopi Tribe in Arizona and Chinese.

I’ve always had a passion for helping others and helping them to believe in their potential. I’ve always wanted to make great change, that’s what brought me into a short political career. But my ancestry had other plans for me. My great aunty Iris Clayton told me I was to be the Storyteller of my family when I was 12 years old. I didn’t realise what that meant until my early 20s. I am a storyteller by trade and by blood.

As for my work and what I do? I’m a jack of all trades, and a master of some! I am a writer, a director and an impact producer in my career, but I still take the time out to give back to my community when I can. I like the balance of learning and progressing my own career as well as bringing up others around me.

Helping young Indigenous artists has always been a passion of mine. I feel like I was doing the job long before I started working there.

I believe that access and personal empowerment are two of the biggest barriers. Access to opportunities that the arts can offer, which can strengthen their spirits and on a vocational level give them the experience they need to get to where they want to be in this life. And personal empowerment. Plant a seed in a young person’s mind, water and nurture it enough and it will blossom, giving beautiful fruits.

There’s nothing ‘wrong’ with Indigenous kids, but when the world around you is set up to watch you fail, is it really their fault? If we believe in our abilities and build each other up, there’s no stopping us, especially young people. Show a young person, black or white, something outside of their own bubble and you’ll see them light up the world.

In 2016 you worked on the production of Stolen at the National Theatre of Parramatta as Assistant to the Director with Vicki Van Hout as part of the Create Future Program. This was one of the first experiences in theatre you had after a strong background of film and television. What was this experience like working in live performance and on this play in particular?

Making the jump from film and television into live performance really opened my eyes to a whole other level of storytelling. It was all the same, but all different.

I’ve worked closely with a few Indigenous directors, I watched their processes, their way of working with the actors in rehearsals and how they prepare for the production. But observing Vicki Van Hout, the Director of Stolen in action was inspiring. I could see a lot of similarities in both areas, and Vicki couldn’t have been more of a perfect introduction into theatre.

I remember opening night at Riverside Theatre. I was so nervous, with no need to be! We pre-set the stage, gave the traditional “chookas”, then it was lights up, enter audience. The most memorable thing about working on Stolen was watching the audience’s reaction to our hard work. As much as I wanted to watch our amazing actors perform; I was mesmerised by the audience watching the play. I’d never seen anything like it.

In your opinion, what do you think art has the capacity to achieve?

Art is the expression of human creative skill and imagination. Art is only limited by limiting your own imagination, and by limiting your own imagination, you’re in turn limiting where your art can go, who it can influence and what can it change. I believe art has the ability to educate, to plant seeds, to grow, to impact and to ultimately create change. Art gave me my superpowers. Why shouldn’t everyone have that chance to unlock their own superpowers too?

What would you have said to your 16-year-old self – knowing what you know now about the arts, screen and culture industry?

It’s easier to ask for forgiveness than to get permission. I’d tell myself to be bold in all pursuits in life, and never doubt yourself. And believe in what mumma always says, ‘you’re a weirdo! Be the best weirdo you can be!’

What is next for you?

I think this is the first time I’ve struggled to answer a question like this. I left Carriageworks to finally get my stories out to the world. I’m normally structured, organised and highly scheduled… but this time around I find myself dedicated to my writing. I’m trusting this and waiting to see what the universe has to offer me this time around I guess.