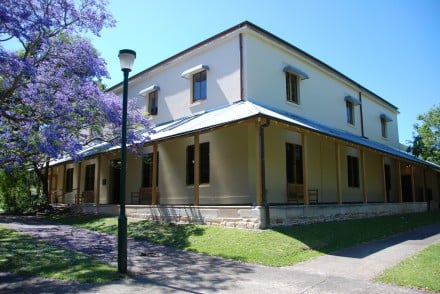 Garry Owen House is located in the Callan Park complex on Balmain Road in Rozelle. The house is tenanted by Writing NSW.

Writing NSW promotes writing in NSW by offering literary resources and professional information to established and aspiring writers. It provides a venue for events such as workshops, book launches, readings, literary evenings and lectures as well as meeting spaces for writers’ groups and literary organisations. These and other events attract more than 13,000 visitors to Garry Owen House every year

Writing NSW also contributes to literature infrastructure throughout the State by accommodating other literary organisations and individual writers at Garry Owen House. Organisations currently accommodated in this way include:

The Guild of Craft Bookbinders

The facilities at Gary Owen House include a number of spaces for writers to work. Some spaces may be available for temporary residence periods.

Find out more about Writing NSW.