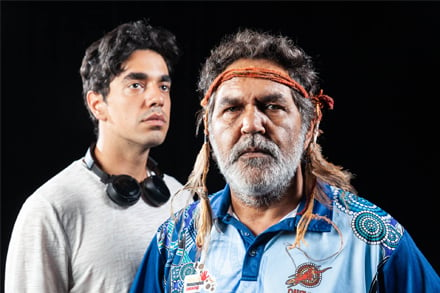 Ahead of its run at Sydney Festival, Nardi Simpson spoke with Create NSW about her new play, Black Drop Effect.

Can you tell us about Black Drop Effect and what can audiences expect?

Audiences can expect a great looking and sounding outdoor play that explores knowledge transference – the practicing of culture and the complexities of Australia’s shared history. I really wanted to create a work that had First Nations stories, knowledge, actors and creatives at its centre.

The Black Drop Effect references an optical illusion that sees shapes appearing closer than they actually are. In this play, those two forces are black and white Australia. The content of the play explores the mistakes, misinterpretations and distances between these two entities through the eyes of a newly formed Indigenous dance group and a non-Indigenous event manager for a celebration of ‘the 26th’.

We have a company of 12 First Nations artists and 10 non-Indigenous creatives delivering a multi-disciplinary performance that includes design, projection, composition and text. I hope it proves to be empowering, funny, challenging and emotional for the audiences who come to see it.

Can you tell us about the process of developing this project?

I worked with Director, Felix Cross, Designer, Lucy Simpson and Video Artist, Mic Gruchy on a different project three years ago. We wanted to revisit those partnerships again in a new work. Black Drop Effect came about after Sydney Festival Director, Wesley Enoch’s call to arms to First Nations creatives, to be ready to combat the overwhelming colonial narrative expected to feature in 2020.

I worked on creating a piece that spoke to the experiences of contested histories, tradition, celebration and complexity, and Bankstown Arts Centre was good enough to come on board for a development period of the script earlier this year, then as presenters of the play for the 2020 Sydney Festival.

How are you expecting audiences will respond to the project?

My aim is to write a story that evokes strong emotion from the audience. Whether it’s with humour, tenderness or confrontation, I really want the audience to be placed totally inside the world of the play, feeling the emotions of the characters, the power of the environment and the complexities of this country’s history. Lucy Simpson’s beautiful visuals and James Henry’s emotive compositions will help the actors draw the audience into a world somewhere between black and white, the Dreaming and daylight, culture and history and celebration and despair.

Can you talk about navigating historically sensitive material and bringing that to a contemporary Australian audience?

Humans are messy. We try really hard to look like we have it all sorted but in reality, if you scratch the surface, the most ordered of things contains great chaos.

As I developed the script I tried to embrace this fact and steer clear of sermonising one version of history as opposed to another. Instead I attempted to embrace the complexity, offer questions instead of answers and privilege as much as I could ‘humanity’ rather than ‘culture.’ This has helped me create a work that hopefully leaves space for more than one experience.

I think that today, whoever we are and whatever background we have, we are all trying to navigate a day in our shared history that is increasingly problematic. By avoiding a narrative about historic rights or wrongs, we can allow characters and their relationships not only to reflect what we may or may not already know, but to teach us something of ourselves and each other.