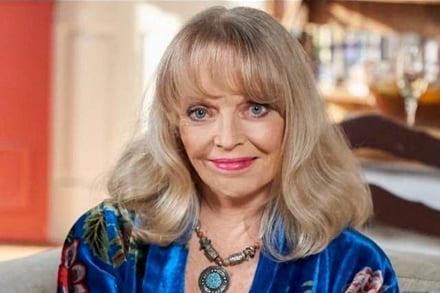 Australian actress Belinda Giblin has been lighting up the stage and TV since the 70s. And as she clocks up 50 years in the biz we spoke to her about sustaining a successful career in the arts and her latest gig, Family Values, a blackly comic drama situated squarely on the fault lines that divide Australia.

You’re currently starring in the Griffin Theatre Company’s new production of Family Values. Tell us what excites you about it.

It’s a new David Williamson play, it’s 70 minutes – fast and furious. The opportunity to work on a new Williamson piece that has never been done before was another thing! It was a great chance to work with David who workshopped the script during its rehearsal. And I was also excited to be directed by Lee Lewis for the first time, at the Griffin.

Family Values delves into several very topical issues that we all recognise. David’s genius in this production is that he’s presented on stage every point of view. It’s very fair. And it’s mixed with not only great hilarity, as only David Williamson can, but also great pathos.

In this production I was also excited to reunite with Andrew McFarlane for the first time since we played lovers way back in the 70s in The Sullivans. In Family Values he’s my husband and we are the parents of three young people. One is highly religious, another one is an inner-city latte-sipping greenie activist, and the other one has left her husband to marry a woman who is a Border Force officer – and she’s a Border Force officer herself – so we’ve got every side of these charged arguments represented within the family itself.

As you mention this production traverses a lot of topical issues. What do you hope the audience will take away from this play?

Family Values is a catalyst for discussion. It’s about immigration and Nauru and Manus Island. It’s about detention, it’s about the medevac laws, it’s about a family. I think the audience will go away considering and thinking about their part in it all these things, and their contribution to them.

Tell us a bit about your character, Sue.

I play a retired ex-social worker married to a retired High Court judge. We’re both looking forward to a nice, relaxed retirement, but everything is thrown into disarray by the situation on a 70th birthday.

Sue is quite a bolshie activist herself but she’s got these three dysfunctional children, and these two people who are looking forward to a retirement are landed with this catastrophic sort of situation, which they need to deal with, and I think he says, ‘I was looking forward to reminiscing about the good old times and then I realised that there were never any.’ So, what starts out as a nice, relaxed, 70th birthday party for my husband turns into a bun fest.

There’s so much hilarity – I mean, it’s very funny.

You’ve touched on what a stellar career you’ve had so far – how have you approached longevity?

Well this is my 50th year in showbiz and I’m just starting to get the hang of it, I think!

What is lovely is that I’m still working, and I would say the last decade has been the best.

“The myth that we get old and sort of invisible, the reverse is true, really, for me. I’m starting to get the best roles that I’ve ever had. And partly that is because I am getting older and have had more life experience.”

My greatest joy is to put on a funny hat and be someone else.

What’s are your favourite characters to play?

My favourite roles are ones in which I can transform into something quite different. The last play I did before this, John, was the antithesis of this role – a little old lady, and I wore a wig. I was very quiet and very gentle and very reflective. Very different to this character. Before that I played the nun in Doubt at the Fitz. Before that I was in Turquoise Elephant playing an absolute boof-o character, like a commedia dell’arte character at Griffin. And before that I did my one woman show Blonde Poison at the Opera House and the Old Fitz, where I played a German Jewess traitor – all markedly different roles and I’ve loved all of them.

And what’s next for you?

Family Values has a very long run. We’re at The Griffin Theatre in Sydney until early March, and then we go to Canberra, Geelong, and then Parramatta.

And the other lovely thing is I’m back on television as Alf’s ex-wife on Home and Away after 31 years and that’s also wonderful. I reckon I’ve got another 30 years left in me and I just can’t wait to see what happens next. It’s always so exciting to think of the next thing.

Family Values is at Griffin Theatre Company until March 7.